Portugal is an almost rectangular shaped country which shares borders with Spain and the Atlantic Ocean on the Iberian peninsula.  The terrain and climate varies dramatically from the hot, dry Algarve beaches in the south, to the lush cool mountains of the north.

Cristo Rei
The capital city, Lisboa, is picturesque and steeped in vibrant history.  The view of the city as you approach from the south over the '25th of April bridge' is stunning.  To your right as you approach the bridge, you will see the statue 'Cristo Rei' (literally: 'Christ King' - often translated as 'Christ in Majesty') which stands on a huge pillar and overlooks the mouth of the mighty Tagus river ('Rio Tejo').  This is a smaller replica of the even more impressive 'Cristo Redentor' ('Christ the Redeemer') statue which is situated on the Corcovado mountain in Rio de Janeiro, Brazil.
The old part of the city is a network of narrow streets and public squares known as the 'Baixa' ('Downtown'), which comprises many impressive buildings and statues.  This is a stark contrast to the ultra-modern area in the east which was substantially developed for the world expo of 1998 - here you will find a dazzling selection of weird and wonderful modern architecture, including a huge shopping mall, and the must-see 'Oceanario' public aquarium.

Along the river bank to the west of the city are several tourist attractions, including the monument of the discoveries, Jerome's monastery, and the tower of Belém. 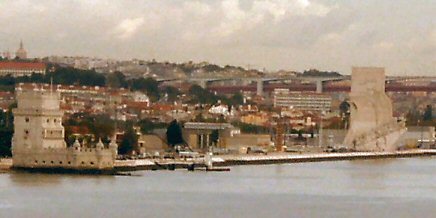 Belém Tower (left) and Monument of the Discoveries

To the south and east of Lisbon is a huge area known as the 'Alentejo' - a sparsely populated agricultural region which struggles to keep the younger generation interested in running the traditional farms.  One of the major Portuguese exports is cork, which is harvested from tree bark in this region.  The area is also well known for producing wine, olives, eucalyptus, sunflower, and various fruit and vegetable crops.

The Alentejo borders with the Algarve in the south, whose economy relies heavily on tourism.  There are many English and Irish pubs in the seaside towns, and some places have become rather tacky and commercialised, but there is still plenty of culture and history for the more discerning tourist.

In the far south-western corner of the Algarve is a high cliff known as 'o fim do mundo' ('the end of the world') - the western-most point of continental Europe (the true western-most point of Europe is the island of Flores in the Azores).  Strong winds drive huge atlantic waves crashing into the rocks below, and many fisherman have been killed whilst perched precariously on outcrops of the unstable cliff face - apparently the fish there are tasty enough to risk your life for! 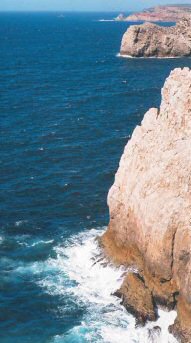 
The beaches of the Algarve are gorgeous, and many of them have interesting rock features alongside beautiful golden sand.  Even in the height of summer though, the waters of the Atlantic can be breathtakingly cold despite the warm streams that drift out of the mediterranean.

Further north, the country seems to take on a more serious character.  Algarvians are known for their laid-back attitude and slow way of life, whereas Coimbra in the centre of the country is the academic stronghold (the 'Oxbridge' of Portugal), and Porto (Oporto) in the north is a hard-working industrial port town.  Even further north, Braga is noted for its devout Catholic population.

It seems that the further north you go, the more spectacular the scenery becomes - with majestic mountain ranges filling the northern regions of the country and providing a somewhat cooler climate and more precipitation than the south.

The only islands that are still considered part of Portugal are Madeira and the Azores.  Other colonial conquests have at various stages proclaimed independence from Portugal, and some have been swallowed up by other countries (ie. the once-Portuguese colony of Goa which is now part of India, and Macau which is part of China).

The independent colonies are Angola, Cape Verde, Mozambique, São Tomé and Príncipe, Guinea Bissau, East Timor and of course, Brazil.  Portuguese speaking people have spread out across the globe, and there are strong Portuguese communities in many countries, including Paraguay, the UK, Jersey, France, Luxembourg, Spain, and Andorra.