A protected biological reserve, Atol das Rocas is an atoll, or reef-island encircling a lagoon, which provides a home to various rare speicies of plant and animal life.  There is no human population, and in fact, people are not allowed on the atoll unless they have permission to conduct scientific research there, such as the volunteers of the Tamar project who tag and track turtles in this vicinity.

This is another protected biological reserve, but there is a bit more human activity here than on Atol das Rocas.  Altogether, there are 21 islands in the archipelago, but only one is inhabited by a population of just over 2000.  Tourism is permitted, as long as strict conservation rules are followed.  The main island has an airport, several villages, a school, a hospital, a power station, and a desalinization plant - all crammed in to just over 10 square miles. 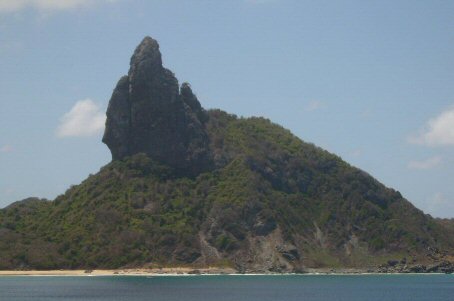 The unusual shapes of Fernando de Noronha's cliffs provide a striking landscape when seen from the sea.  Large ships are allowed within a certain distance of the island, but only smaller boats can actually dock there.  There are also some beautiful unspoilt beaches on both sides of the island.

Together with its neighbour, Martim Vaz, this is the eastern-most part of Brazil - lying about 800 miles off the east coast of Vitória (about a third of the way across the Atlantic). The colourful volcanic rock and coral that make up the archipelago are a stunning sight.

Ilha da Trindade, though discovered by Portuguese explorers (or rather a Spanish explorer, Juan de Nova - better known by his Portuguese name João da Nova, who sailed from Lisbon in the name of Portugal), was once claimed as British soil by the famous astronomer, Edmund Halley, and subsequent attempts to control the islands eventually gave way to Brazilian domination. Ilha da Trindade has no permanent population, but there is a Brazilian military outpost on the island.

Tourism is not really feasible due to the extreme remoteness and inaccessibility of the island as well as the lack of facilities and accommodation. However, the area is of intense interest to scientists, and is still seen as a strategically valuable asset to Brazil.

The Ilhas Martim Vaz (or Martin Vaz) are a group of 3 main islands and several smaller islets, situated about 30 miles east of Ilha da Trindade, having the same volcanic origin as Trindade. The claim of eastern-most point of Brazil goes to the southern island in the group (Ilha do Sul).

There is no human population on any of the Martim Vaz islands - in fact, as far as we know, only once has man set foot on the south island: in 1962, with the help of a helicopter. The waters surrounding the islands are treacherous, with many submerged rocks making it impossible to anchor.

There is some vegetation to be found here, but no trees. Interestingly, the island of Martim Vaz boasts its own endemic spider. There are also crabs and marine turtles in the area.

The word 'penedo' means 'rock' or 'boulder', which gives you an idea of the size of these tiny islands - the largest being no more than a few hundred metres long. There is no flora to be found on most of the islands (just one has scant vegetation), and little fauna - just a few sea birds who use the archipelago as a convenient resting place (and toilet!), and some crabs and insects. The sea is boistrous, making human landings difficult.

Nevertheless, there are remains of an old lighthouse which was built in the 1930's by the Brazilian navy. The lighthouse didn't last long due to siesmic activity, but a more robust replacement was built in the 1990's. Charles Darwin paid a visit in 1832, and some people still visit the islands to carry out long-distance radio transmissions, geological studies, and diving expeditions.